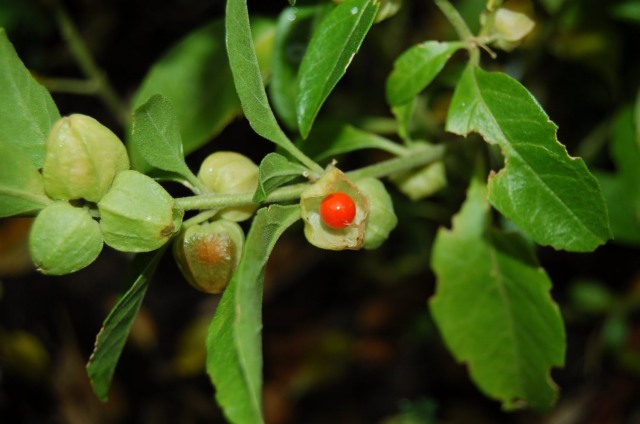 Bio-gen Extracts has developed its extensive range of Standardized Botanical Extracts suitable for several Nutraceutical applications aimed at modern Nutraceutical markets. Each of these extracts have been carefully extracted in a GMP compliant facility to meet the strictest of quality standards while maintaining their efficacy as an effective ingredient.
Some of the Standardized Botanical Extracts currently available include:
Withania somnifera
Withania somnifera is known commonly as ashwagandha, Indian ginseng, padalsingh (rajasthan), or winter cherry. It is a plant in the Solanaceae or nightshade family. It is extensively used in medicinal preparations in ancient India and is popular in Ayurvedic formulations. The main chemical constituents of Withania sominfera are alkaloids and steroidal lactones; mainly tropine and cuscohygrine. The leaves of the plant contains steroidal lactones and withanolides.
Bacopa monnineri
Bacopa monnieri (waterhyssop, brahmi, thyme-leafed gratiola, water hyssop, Indian pennywort) is a perennial herb native to the wetlands of southern and Eastern India, Australia, Africa, Europe, Asia, and North and South America. Bacopa monnineri is a medicinal herb used in Ayurveda. It is popularly known as Brahmi in Ayurvedic preparations. The main characteristic compound in Bacopa monnineri is a dammarane-type triterpenoid saponin known as bacosides.
Moringa oleifera
Moringa oleifera is the most common species of the genus Moringa, in the family Moringaceae. It is commonly known as Morgina or drumstick tree. It has long, slender, triangular seed-pods. It is fast-growing, resistant to drought, and is native to the southern foothills of the Himalayas in northwestern India, and widely cultivated in tropical and subtropical areas where its young seed pods and leaves are used as vegetables for daily consumption. It is traditionally used in Ayurvedic treatment for asthma and epilepsy and also in Ayurveda for ulcers, tumors, inflammations, leprosy, gastroenteritis and anemia.
Gymnema sylvestre
Gymnema sylvestre is an herb native to the tropical forests of southern and central India, Sri Lanka and surrounding regions. The common names of the plant are Gymnema, cowplant, Australian cowplant, and Periploca of the woods. It is known primarily for its leaf extract that suppresses the sweet receptors of the tongue.
Boswellia serrata
The main active ingredients of this plant are Boswellic acid and other pentacyclic triterpene acids, of which Beta-boswellic acid is the major constituent. The Boswellia serrata extract has been clinically studied for osteoarthritis and joint function, mainly for osteoarthritis of the knee. The research showed a slight improvement of both pain and function compared to a placebo. There has been reports of the positive effects of Boswellia in certain chronic inflammatory diseases such as rheumatoid arthritis, osteoarthritis, ulcerative colitis, bronchial asthma and Crohn’s disease.
Centella asiatica
Commonly known as centella, Asiatic pennywort or Indian pennywort or Gotu kola, is a herbaceous, frost-tender perennial plant in the flowering plant family Apiaceae of the subfamily Mackinlayoideae. This herb which is a native to wetlands in Asia is used as a culinary vegetable and as medicinal herb since ages. It has been used to treat varicose veins, chronic venous insufficiency, psoriasis, improve lactation and for wounds, in traditional medicine.
Phyllanthus niruri
Phyllanthus niruri is a widespread tropical plant commonly found in coastal areas, known by the common names gale of the wind, stonebreaker or seed-under-leaf.
It is a relative of the spurges and belongs to the Phyllanthus genus of Family Phyllanthaceae. It is used in Ayurveda for problems of the stomach, liver, genitourinary system, kidney and spleen.
Emblica officianalis
Phyllanthus emblica, also known as emblic, emblic myrobalan, myrobalan, Indian gooseberry, or amla from Sanskrit amalaki is a deciduous tree of the family Phyllanthaceae that is native to the Indian subcontinent. In ayurvedic formulations, Indian gooseberry is a common constituent and is the primary ingredient in ancient herbal ‘rasayana’ (Ayurvedic Medicine) called Chyawanprash. Chyawanprash contains about forty three herbal ingredients as well as clarified butter, sesame oil, sugar cane juice, and honey. In Charaka Samhita, it is documented as a premier rejuvenating preparation.
These botanical extracts have a long standing history and have their place in our history of medicine and wellness.
Bio-gen brings you these timeless Botanicals as easy to use extracts for your formulations.
Write to us at sales@bio-gen.in to know more.